Feels like I’m holding a magical device that shouldn’t exist.

What is this sorcery?

LMAO it’s stupid how amazing it is

These are a bunch of comments from one year ago, when Apple introduced their new chip M1. Yesterday Apple announced new Macbooks with pumped-up versions of M1, humiliating everyone else even further.

You may not care about chip speeds, but there is some next-level corporate strategy that is worth understanding. Let’s dig into that.

What the hell is an M1 chip, and why is it magic?#

Apple has been building computers for 37 years. For 36 of these years, they bought all their computer chips from external providers like Intel. It all changed one year ago, with the introduction of M1.

The iPhone was another story. The first iPhone had a Samsung chip, but already the second redesign featured an Apple-designed chip called A4.

Smartphones have two very strong limitations compared to computers: space and energy consumption. A phone definitely doesn’t have the same space as a laptop and a much smaller battery.

These limitations pushed Apple to develop something called “System on a Chip”. Basically, every object that computes stuff needs these components:

Traditionally, all these would be different components built by different manufacturers put together by Apple (or Microsoft, or Sony, etc.). Imagine a car industry where every car company specializes in one part: BMW makes chassis, Ferrari makes engines, Citroen just seats, etc. Then, other brands buy pieces from these companies and put them together. This was the chip industry (and still largely is).

With the A4, Apple started developing their own version of these pieces, all together on the same chip. This allowed a much tighter integration between the components, resulting in an amazing performance.

How and why did Apple develop the M1?#

Let’s stop for a second. Roughly 10% of Apple revenues come from their computers. It sounds small, but 10% of a humongous pile of cash is still a lot of money. Specifically, that was about 25 billion dollars in 2020. It’s hard to understand how much money that is, so let’s compare it to the revenues of brands you may know. 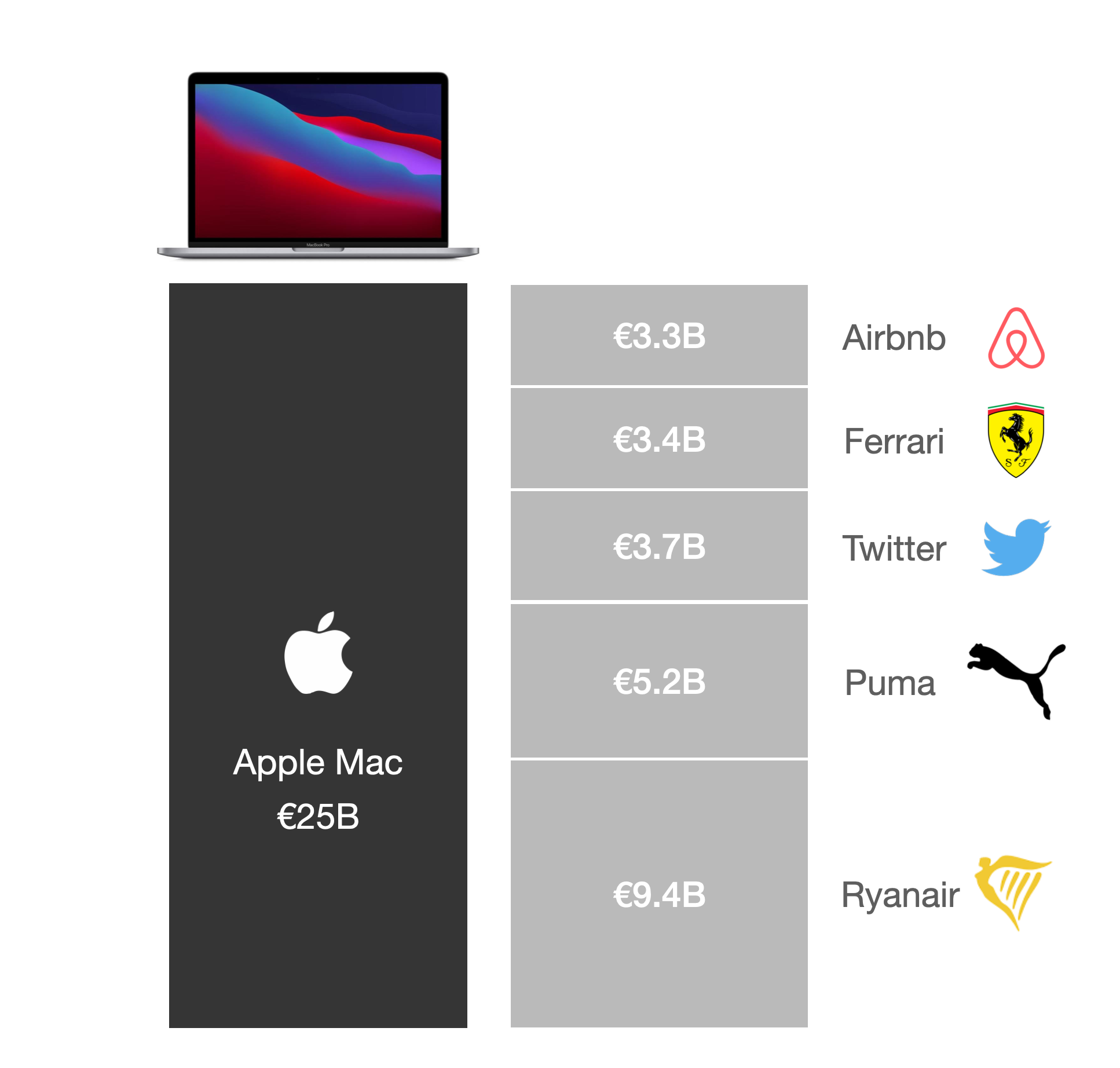 So the Macs alone is a huge business for Apple. But check out how that compares to the iPhone business. 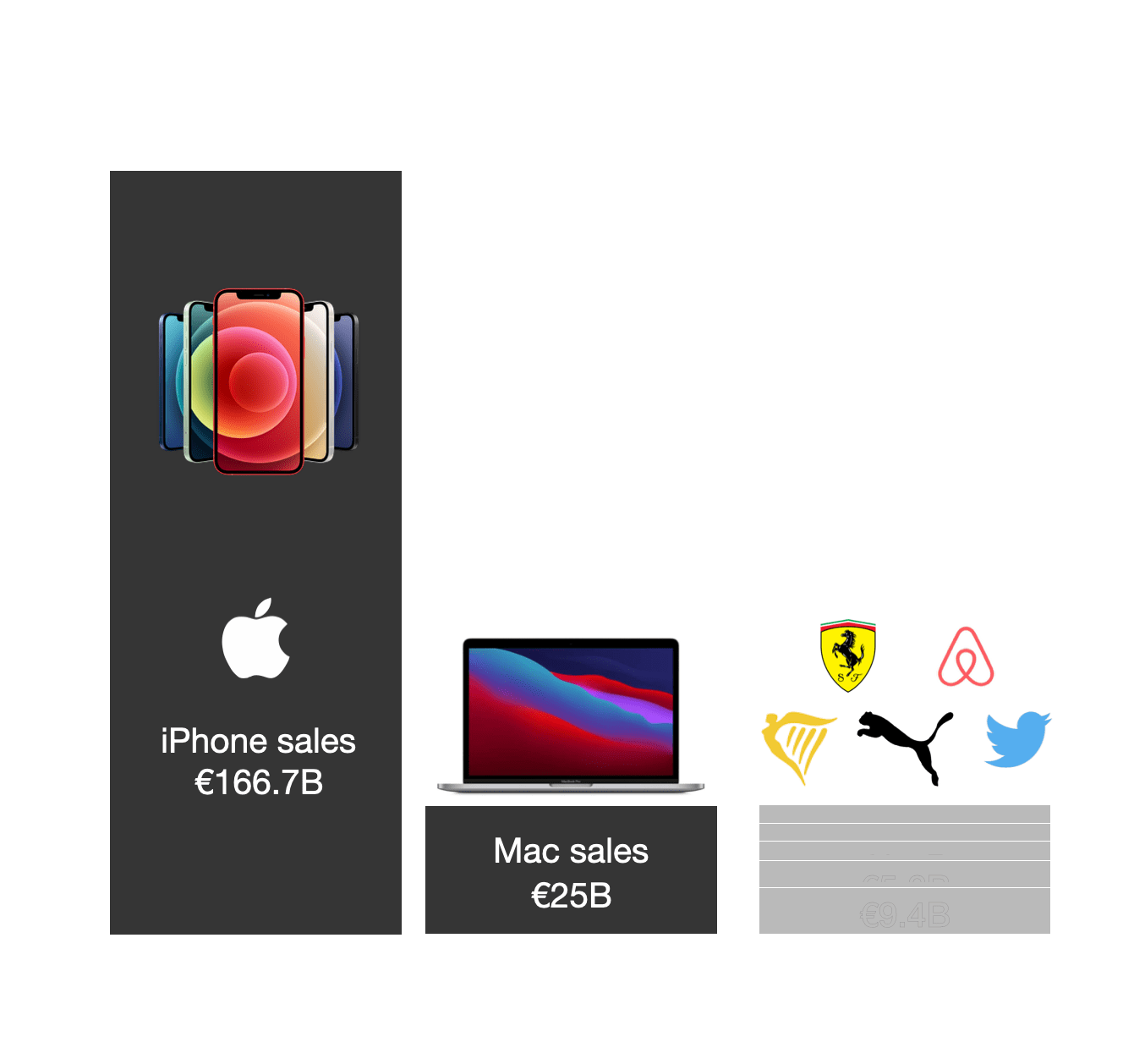 Now, imagine what it means to reinvest the profits from the most successful product in history. Just the iPhone revenues alone are more than two times what Intel makes. It makes sense that the output is some pretty amazing chips. And it makes sense to put these chips everywhere.

This is how the above strategy would look like if you wanted to follow a simple, linear path:

Apple executed a much better strategy for this transition.

People buy iPhones for different reasons than they buy Macs. A lot of iPhones users care about Instagram selfies. Mac users care much more about performance. The desire for Status is maybe the only constant.

How would a professional react if his professional work machine used tech from a selfie machine (the iPhone)? Probably, not well.

So this is how Apple worked around it. One year ago, their iPhone chip was called A14 Bionic. When they had to put a scaled version of that chip on a Mac, they gave it an entirely new brand. They called it M1. Technically, it’s built on the iPhone’s chip, but that’s not how it feels.

In the beginning, Apple put it just on a couple of models (Macbook Air, Mac Mini, and Macbook pro 13"). Later on, it put one on the iPad Pro. In case you had any doubts about the fact that the M1 is a Mac chip on an iPad and not the other way around, Apple even made an ad where a James-Bondish version of Tim Cook infiltrated in Apple’s HQ, stole the M1 from a Mac, and put it on an iPad.

Why did Apple put that chip on a few random computers before putting it on an iPad Pro? Because no one would ever buy a Mac with an iPad chip. But what about an iPad with a Mac chip? That’s dope, give me one.

Notice how the iPad Pro had an “OK” spec bump with the M1, (+50% faster CPU, 40% faster graphics). Yet, look what happened when M1 came to the Mac (again, another proof that iPhone and iPad chips were superior to Intel chips for a while).

This is a graph that shows how entry-level Macs with M1 humiliated fully upgraded Intel Macs that cost 4 times more.

So yesterday Apple closed the full circle. It presented new M1 chips, called M1 pro and M1 Max, with even better performance than the M1. They powered some new “unleashed” Macbook Pros, and people are rushing to buy them (me included).

They all think they got some chip from the future in their new computer. In reality, they’ve had the same technology in their pockets for years.

This is the real magic.

This is just a personal opinion, and maybe less interesting than what’s above. I still want to say what I think about the new Macs.

They’re the best laptop ever built. Yet, I’m a bit bored. How brave were the old ones? The touchbar was completely useless, but a bold test to reinvent a classic device. What about the 4 USB C ports, and that’s it? Everyone hated it, but I rolled with it and right now very rarely use dongles.

The old Macs had attitude. This new one may be the most powerful machine ever built, but it looks like the Macs Apple was pushing 10 years ago.